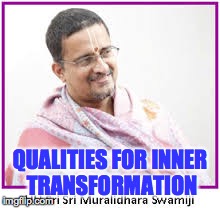 What is Dispassion/Vairagyam and why is it essential for each of us and society?

His Holiness Sri Sri Muralidhara Swamiji says, "In this world there is a great difference between going hungry and observing Spiritual Fasts (Upavaasam). A person can say he is going/being hungry when he has no food to eat and hence his hunger. But we generally acknowledge a man observing fasting, as one who has everything to eat but avoids it for the sake of spiritual reasons.

Similarly, he is not considered a Mahatma or a dispassionate man, that who lives in streets (like beggars), who has no home, no possessions to call his own and does not even have to worry about his next meal. We just consider some of such people as lazy men, those who beg even when well possessed with strength to work for their lives. We pity those who are handicapped or diseased and take to begging for their life means. We never call such people as Mahatmas.

It is not a great wonder when a millionaire gives away a few lakhs for charity. But it is definitely great when a poor man, who struggles to make his both ends meet, performs charitable acts! Similarly is it not greater that a householder who faces difficult situations often in life, devotes some of his time to remembrance of the Lord, than those people who spend good amount of time in  meditating upon God after having completely forsaken their lives for this path? In the same way, it is not great that a person leaves back his family to suffer, while he seeks a secluded spiritual life. Any food or shelter that he recievs  in this way, is just for his sake. He does not have liabilities or worries to feed or care for others. He can sustain his life however he can, in any way. But Bhakti (loving devotion) to God is great and high, of those who face the challenges of everyday life with a family to nurture and care for and still manage to devote himself to God.

A householder has to care for his spouse, educate his children, have a roof on top of their head and have them  well fed. In the middle of all these responsibilities, great saints like Tukharam, Thiyagaraja Swamigal, Purandaradaasar etc developed great Bhakthi for the Lord and  lived with complete dispassion towards everything else!

We should always try to understand deep contexts of everything instead of just skimming through the same. The greatness of the help that the squirrel did for the construction of bridge across the sea in Srimad Ramayanam is that he worked amidst the gigantic 'Vanaras' (monkey force) which were working with big bolsters of rocks; there was every possibility the squirrel could get smashed amongst them. Moreover there were giant waves on the ocean which could overpower the small creature that the squirrel is, any time. In spite of these life reckoning forces around, the squirrel still performed 'Kainkaryam' (service) to Lord Sri Rama, in every way that he could. Like this, it is only beautiful and apt that one should live fearlessly and boldly in the path of Bhakti with dispassion and knowledge. This is what is taught to us by the life of Lord Sri Rama also.

Some Mahatmas are blessed to realise their true Self 'Atma' and then choose to live in solitude away from the crowds, under a tree, a forest or even in mountain caves. Some other Mahatmas choose to live with the masses and perform beneficial actions for all, even after attaining Self Realisation; just like Lord Sri Krishna. When an enlightened Mahatma does such actions for the welfare for all, as per Vedanta it is accepted that the actions and ends would least impact him. All such actions are not for his own fame, happiness or other consequences. If we contemplate more on this, we will understand that a Mahatma who chooses to initiate beneficial actions for the society is like a water fountain in the middle of a city; many people benefit from him. If all great enlightened Mahatmas live away from the society, all it encounters are un-beneficial, incomplete and incorrect expressions and teachings related to Bhakti and Knowledge and thus Truth and Dharma stand to be altered.

Thus we should also pray to The Lord to bless us with Knowledge, Bhakti and Dispassion and to be able to dispassionately perform useful and beneficial actions (kainkaryams) to the society always, just like how Lord Sri Krishna lived and exemplified."

Read other interesting and useful articles of this month here