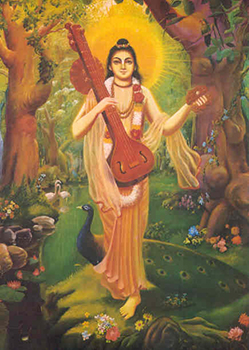 Sage Narada is special. He is being celebrated by Lord Krishna in Bhagavad Geetha as His own form amongst Maharishis. Always in supreme bliss of His realization, he instigates and sustains happiness in others by his ever sweet musical rendering of Lord’s names. He is considered as a great master of Bhakthi path. He cherishes being called as the good bhaktha of his Lord. Described as having all good qualities laid out in scriptures, he was even worshipped and liked by evil henchmen of Hindu epic stories.

In his earthly birth due to a curse, a musician originally called Upaparhanan from heaven, was blessed by His grace to be associated with Godly satsang at a young age of 5. By his faithful service to sadhus, he was blessed with knowledge and dispassion (loose translation of a Sanskrit word called Vairaghya, denoting one of the main qualifications of a spiritual aspirant).Devoting great love for the Lord, he was vested of His grace in return. He was blessed with the knowledge of Gods names and lived his life by the means of chanting and singing the names. Thus he lived and upon the end of his life, he was associated with Lord Brahma as his son.

Sage Narada received the highest knowledge of ‘Atma Upadesha’ from Sage Sanatkumarar and ‘Bhagawat Upadesha’ from his father, Lord Brahma. In the holy names of the Lord Narayana, he is entrenched in bliss and travels through all of the universe singing and spreading the holy fragrance of the divines names.

Sage Narada shared the traits of Lord Rama with Sage Valmiki and is the cause for the origin of epic Ramayana written by Sage Valmiki. Sage Narada explained the Dharma concepts of Bhagawat with Sage Veda Vyasa and thus ‘Bhagawatam’ , a holy text form of the Lord himself was born. He instigated Prahlad and Dhruvan, the young and great Bhakti stalwarts in their search and ‘capture’ of the Lord at their own young age of five. In all of the Lords playful and meaningful past-time leelas, Sage Narada has been a key ‘actor’ and played the cause of all tale spins as per His wish.

For the sake of goodliness and godliness of all living beings in this period of Kali Yuga, with great kindness and grace Sage Narada has compiled all of the Bhakthi related components of the ancient scriptures. This compilation is called as the ‘Narada Bhakthi Suthram’ and is an easy dogma to understand and live by. Sage Narada has prescribed chanting of the ‘Hare Rama’ Mahamantra as the oars of our mind to use in our journey across the difficult clutches of time and tide of Kali Yuga.