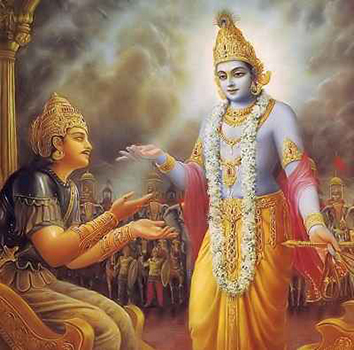 On the battlefield of Kurukshetra, Arjuna asked Krishna thus: “Krishna, why do people in the world do sins? Don’t they realize that doing and accruing sins are bad? Even when they know that God is watching why do they do such?” Krishna replied “ Everybody wishes not to do any sins. But due to the nature of their mind, they are unable to control committing sins.”

Sri Sri Swamiji says “Human mind has a basic trait of getting distracted and disturbed. Our minds are constantly getting bombarded with external stimuli, which we do not realize while we are still absorbed in worldly matters. It is only when we do meditation, do we realize the mind’s entangled relationship with worldly, even, mundane happenings.”

He further states simple instances to explain this nature of mind, which you and i can relate to so well. “ A ready-to-renounce-all person, engrossed in meditation is approached by another person, who relates his travel experiences to a place and religious celebration of some sorts that happened there. On hearing this, the mind of the renounced starts contemplating one such tour and witnessing of activities for himself. Thus his mind was distracted by something that he hears.

A while later he reads about a musical performance in the city and he starts contemplating on attending the musical program. This is a distraction to his mind that happened due to something he saw (news). The same person gets hungry after a while when he experiences smell of food being cooked. This is yet again some distraction brought about by different sets of his sense organs. All these are experiences of a person who has resolved to renounce everything, yes, everything; But it is his mind that has not yet cut itself from the yokes of its own wavering nature.”

In a different scene, Sri Shankara Bhagavadpada happily accepts to being killed by ‘Kaabali’ tribal folks as part of some of their rituals. They reason out that since the Guru advocates that each ‘Atma’ (loosely translate as ‘soul’, but with differences in deeper contexts) is different from the body and mind that houses the atma; and that Atma does not get affected by the physical troubles faced, the Guru should have no problems with their plans. This is agreeable to Sri Shankara. It is well known to all that He was saved then by Lord Narasimha who took over His disciple Padmapadar and diminished the Kaabali intention. Do you know what Sri Shankara prayed to Lord Narasimha then? He did not thank God for saving His physical body, rather He rebukes the Lord for having saved his body thus entrapping His Atma further with the body.

Thus mind is really different from its source, the Atma. Great Mahatmas realize atma by destroying the nature and actions of the mind.

Sri Sri Swamiji says that “ In reality, controlling such a thing called as mind needs constant monitoring and discrimination of thoughts that feeds in and out of this.” While Sri Sri Swamiji expounds many other characteristics of mind, its control techniques, as well the real truthful nature of Atma, He also reveals that an easy way to control mind is to vest ourselves in deep Bhakthi as well as stay in constant company of great mahatmas and their aspirants who have destroyed their minds”